It was our last vacation before Baby J was born. We sat in the atrium of the cruise ship with a tiny pencil and wrote down the things we had always wanted to do but hadn’t – our bucket list. We crossed off a few things right then – like snorkel a shipwreck (the Antilla in Aruba) and later, see a movie at the Hollywood Forever cemetery. Since we just recently completed another item, take a hot-air balloon ride (in Temecula), I thought this would be a good time to write about the beaches on our bucket list. Here are our Top 3.

“The Beach” in Thailand: “The Beach,” the 2000 film starring Leo DiCaprio, was filmed on Koh Phi Phi Leh in Thailand. They say the increase in tourism since the movie has damaged some of the peaceful environment, and unfortunately, the tsunami took a toll on the islands as well. I imagine sitting on a secluded beach surrounded by limestone mountains and turquoise water, eating curry on a hammock. Its status as a national park should guarantee this beauty for a few more years until we can get there. The flight is long from California! While I would love to pay extra for one of those cool Thai Airways flights with the onboard bar, it’s not in the budget. Also, due to mass flooding, Thailand is just not the place to be right now.

Playa Tamarindo, Costa Rica: We’ve been to Limon on the Caribbean side of Costa Rica but would love to travel to the Pacific side for obvious reasons – the surf. James has been desperate to go back to surf the famous Costa Rican waves. Check out the horrendous teen movie Costa Rican Summer for some awesome shots that were actually filmed in Costa Rica. The Leatherback turtle also lays her eggs on the beach here. Baby J would get a kick out of a bunch of baby turtles making their way down to the ocean, but she’d probably be too loud and scare them into their holes too. We’ve heard Costa Rica is more expensive than other Central American countries, but we hope to visit there because it’s relatively safe and has a better infrastructure.

Bondi Beach, Sydney, Australia: We picked this beach in Australia because it’s world famous for its natural scenery and people-watching. We would love to see tourists from all over the world swim, surf and sunbathe in one place. It also has a backpacker vibe, which we wish we could still be a part of with a child. This is another long flight that strikes fear in our hearts until Baby J is bit more civilized.

What’s on your beach bucket list? We’ve loved Caribbean beaches on our cruises, but would like to see some culture too. Is there even a beach today not touched by American tourists? If so, is it worth the hassle taking a baby there? 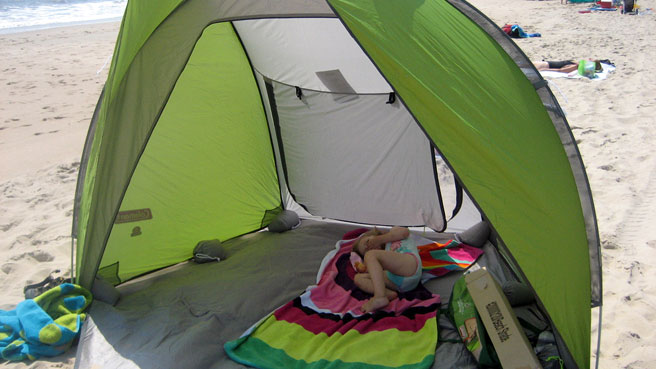